The Blended Retirement System: An Opportunity for Advisors

On January 1, 2018, the Uniformed Services Blended Retirement System (BRS) was established. This program marks the first change to the U.S. retirement system in 70 years—and an unprecedented opportunity for financial advisors to help generations of service members. The BRS is separate and distinct from the military’s traditional legacy pension, although it does not end the legacy pension for those with more than 12 years of service. It does, however, create a significant choice for current service members with fewer than 12 years of service and starts an era of retirement planning for new service members. Here, we’ll take a deep dive into the BRS, including the unique planning opportunity it presents for you.

Let’s start with the BRS basics—the general rules regarding eligibility and length of service, as well as the implementation timeline.

Reserve members of the Navy, Air Force, Army, and Marines are also uniformed services, as are the U.S. Army National Guard and the Reserve Corps of the Public Health Service Commissioned Corps.

Eligible active service members, reservists, and National Guard members have from January 1, 2018, to December 31, 2018, to choose either the legacy pension or the BRS. Personnel who do not make an affirmative choice will remain in the legacy pension. Once the choice is made, however, it is irrevocable. As such, eligible personnel must complete mandatory training.

To help you understand the BRS defined benefit, let’s compare it with the legacy pension.

Pension formulas. The formula for the legacy pension is as follows:

The BRS uses the same formula but reduces the multiplier from 2.5 percent to 2 percent:

This small reduction in percentage has a large effect on the benefit. For the service member with a retired base pay of $100,000, switching to the BRS decreases her pension to 40 percent of the average of her highest 36 months of base pay:

Lump sum. The BRS pension has a lump-sum option that the legacy pension does not offer. Retirement from the military often occurs several years before social security full retirement age. A retired service member may elect to receive either 25 percent or 50 percent of his or her pension as an up-front cash lump sum. This payment reduces the monthly pension to 75 percent or 50 percent, respectively, of the full amount. The monthly pension returns to its full amount when the retired service member reaches full social security retirement age.

Since the BRS will cover service members born after 1960, their full social security retirement age is 67. The lump sum may be taken in one year or spread over four years to mitigate the tax consequences. (The military’s discount rate for 2018 is 6.99 percent, and a higher discount rate means a smaller lump sum.)

Thrift Savings Plan (TSP) automatic and matching contributions. The military’s TSP is not new. Since 2001, service members have been able to contribute a percentage of their base pay, special pay, or bonus to traditional pretax or Roth after-tax investment funds. Individual contributions cannot exceed the annual deferral limit set by the IRS. 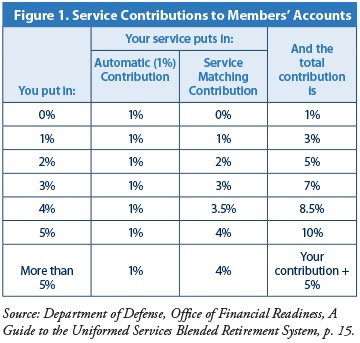 All vested automatic and matching TSP contributions are portable and may be rolled into a qualifying retirement account.

Continuation pay. Continuation pay is an added benefit offered by the BRS that is not available under the legacy pension. Personnel who have between 8 and 12 years of service and are covered by the BRS may receive a one-time bonus if they commit to extending their service. The minimum commitment is three years, and the bonus amount is discretionary.

Service members who joined the military between 2006 and 2017. These individuals present the most significant opportunity for you. The magnitude of their choice to remain in the legacy pension or to opt in to the BRS cannot be overstated. Personnel in this group can have as many as 11 years of service or as little as 1 year, and they may be uncertain about their long-term career plans. Both the legacy pension and the BRS defined benefit require 20 years of military service. But the legacy pension’s percentage multiplier (2.5 percent) is higher than that of the BRS (2 percent).

“What-if” variables. Your analysis of the “what-if” variables will provide valuable insight into what the BRS choice means for retirement plans. For example, if a client has been in the Navy for 11 years and is likely to stay in the military for 9 more years, illustrate how a legacy pension would be one part of a retirement plan. If this client is thinking of leaving the military before the 20-year mark, demonstrate what the loss of the pension could mean to his financial security. Or, if a client has been in the Air Force for only five years and is unsure about her career plans, calculate the difference between the legacy pension and the BRS pension. If this client doubts that she will stay for 20 years? Demonstrate how the TSP’s automatic and matching contributions will determine the amount of her portable retirement assets.

Beyond pensions. Of course, your guidance should not be limited to the choice between the legacy pension and the BRS. Suppose a client decides to opt in to the BRS. He will need advice on whether to invest his TSP into a traditional pretax fund or an after-tax Roth fund. You might show a midcareer service member how the one-time continuation bonus could be invested and factored into an overall investment strategy. If the client reaches 20 years of service, illustrate whether the 25-percent or 50-percent cash lump sum is a good choice in the same way you analyze lump-sum payouts from a private corporation.

The military is the first job for many individuals. As such, I think you will find that new service members covered exclusively by the BRS present a chance to educate younger generations about retirement planning. Their assets, income, and knowledge of financial planning will be limited. The advice you give may be pro bono—but it will be meaningful.