Is the Economy Growing, Slowing, or Both?

Well, the GDP report came out this morning. The GDP is an attempt to measure the size of the economy. Although the GDP has its problems, it is nevertheless reasonable to use it as a consistent baseline as to what direction the economy is moving. I have seen coverage today both on how great it is and on the many problems. Let’s take a more detailed look to see which side is right—or whether both have good points.

Is the economy growing?

The headline news, as it turned out, was good. On an annualized basis, the economy grew by 4.1 percent in the second quarter, and growth in the first quarter was revised up from 2 percent to 2.2 percent. This is the highest quarterly growth rate since 2014, and it is getting close to the highest levels since the crisis. On a headline basis, this is good news. 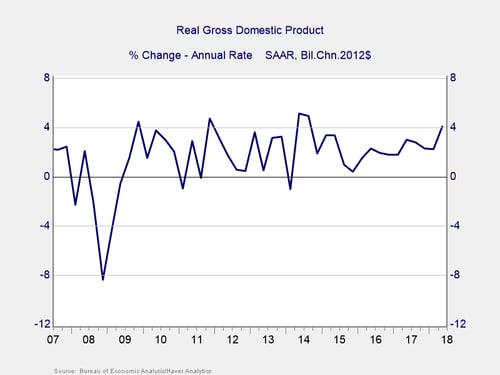 We can see the same trend on an annual basis. While quarterly numbers can bounce around, the trend from year to year tends to be smoother. Even here, though, you can see a real acceleration after a pullback at the end of 2015, and we are getting close to the high point since the crisis.

So, is the economy growing? The answer is an unequivocal “yes.” Growth is actually quite strong by the postcrisis standards, and it is even very strong by the standards of the mid-2000s. As I have noted before, we are in a good period here, and today’s report ratifies that. The cheerleaders have real evidence on their side.

Is the economy slowing?

Moving on to the second question—is the economy slowing—the charts above also offer some evidence that this is quite possible as well. Every time we have had growth hit this level since the crisis, it has then rolled over. We need to consider that possibility and, more useful, try to figure out what would make it different this time. To do that, we need to take a closer look at where that growth has come from to see how likely we think it is to continue.

The economy consists of four major components: consumer spending, business investment, government spending, and net exports (i.e., exports minus imports). Looking at the growth of these four components will therefore give us some more insight.

Consumer spending. The chart below shows us that spending growth is at close to the highest level since the crisis, suggesting there may not be much room for it to rise further. Indeed, when spending growth has hit this level in the past 10 years, it has tended to subside fairly quickly. On an annual basis, we see much the same thing. Looking at other supporting data, we see consumer borrowing rising, and wage growth remains constrained. While consumers remain confident overall, they are simply starting to run out of money. Given that and the previous behaviors shown in the chart, consumer spending is unlikely to accelerate and drive growth higher. It may even start to pull growth back. 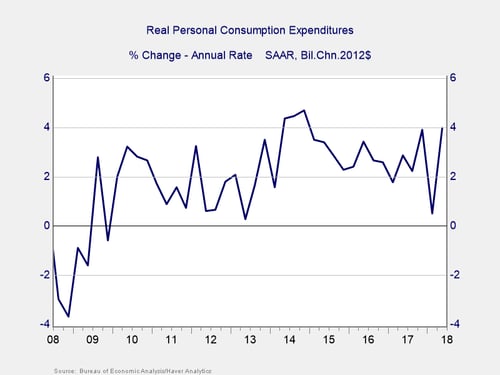 Business investment. For business investment, shown on an annual basis in the chart below, we see the same thing. While investment growth is not at a particularly high level by postcrisis standards, the trend has been down rather than up. Plus, there is no sign of that changing in the most recent data. Just as with consumers, while confidence remains high, there simply does not seem to be the impetus to push it higher. The prospect of faster growth from business is unlikely to accelerate growth, and it may well pull it down. 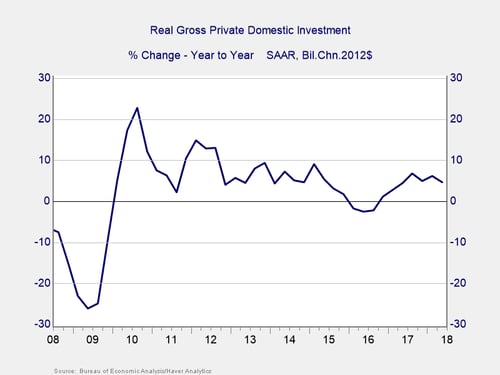 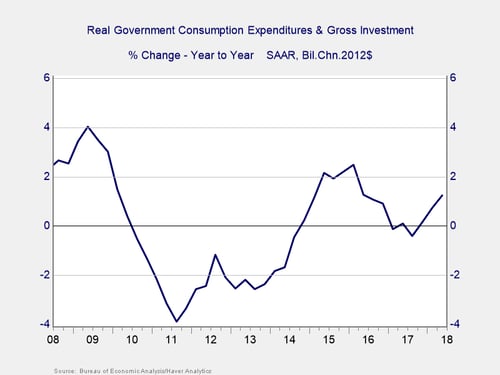 Net exports. Finally, net exports have been on a downward trend for years. But they just spiked up and added meaningfully to growth last quarter. Is this a change in trend that could generate faster growth in the future? Unfortunately, probably not. Analysis suggests that the spike was largely due to the Chinese buying soybeans ahead of impending tariffs, which means the spike is likely to be reversed next quarter. This would take growth down rather than up. 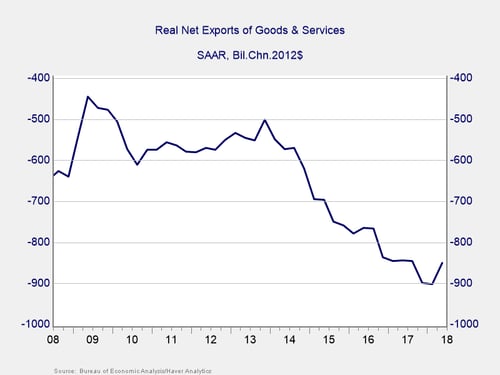 Big picture? While current growth is strong, the trends in the majority of the components of GDP look more likely to stay steady or even decline than to increase. The answer to the second question—is economic growth slowing—is therefore (probably) “yes.” The pessimists have evidence on their side as well.

As good as it gets

Slowing growth, especially from a high level as we have now, should still leave us with reasonably strong growth. Overall, then, I side with the optimists (at least for the moment). But I also agree with the pessimists that it is important to see what is coming next. Knowing what to expect lets you plan, and I am all about planning. Enjoy today’s report, but be aware that this may be as good as it gets.